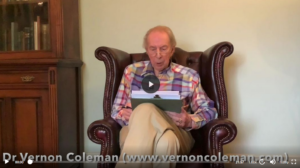 In this video Dr. Vernon Coleman  explains why the experimental COVID-19 gene modification injections masquerading as vaccines, from Moderna and Pfizer, may devastate the human race. He says that this is the most important video he has EVER made, and urges EVERYONE to pay attention.

If you have not yet received the COVID injections, I urge you to watch these videos from Dr Sherri Tenpenny and Professor Dolores Cahill, They explain in detail how and why, after you take the fake “vaccine”,  your immune system may no longer be able to protect you from even the  simple cold or seasonal flu, and as a result, any virus or pathogen might kill you.

This Swedish Professor of infectious diseases is also forecasting a “second wave”. Professor Olsen says that the next pandemic will be triggered by a new flu virus against which humanity has no protection and that it will kill many millions of people..

Also, please read these 10 things you should know before taking the COVID injection then stop and think. Your life and the life of your family may depend on it.

NEWS HEADLINES: “The deaths around the world from the new mutation of COVID now number in the hundreds of millions.

Yes folks, hundreds of millions are now dead and thousands more dying every day from this new strain of COVID which is sweeping the world and for which there is NO resistance or cure.

Vaccine manufacturers are scrambling to find a solution. The most promising of which is being hurriedly rushed into mass production. It is the mRNA Version 2 from Moderna, promoted by Bill Gates himself on TV recently.

Due to the urgency of the situation, this new vaccine will be given emergency authorisation for use on the general public, once again bypassing all of the normal safety trials on animals, so that the short-term and long-term secondary effects, just as was the case for the first wave of COVID shots in 2021, are unknown”.

Yes, you might see these or similar headlines on your TV screens before the end of the year, or early in 2022. Of course the new version 2 “vaccines” will not help in any way, but will make the situation even worse. Millions more people around the world will die.

It is what Bill Gates, early in 2020, called, “the second wave”, and he said, sharing a knowing smirk with his wife “This one will certainly get your attention”. He was right. But how did he know this?

Bill gates knew about this second wave of virus pandemic because the whole COVID pandemic hoax was meticulously planned, decades ago, and this will be the next stage.

He could say this because he knew that the mRNA gene modification injections masquerading as vaccines, introduced in 2021, were designed to render the human immune system ineffective in the future against an attack by ANY new virus, even influenza or the common cold.  .

He knew that after receiving the injections, his messenger RNA would spread throughout the body, overriding and superseding the body’s natural immune defenses, and rendering them useless, so that ANY pathogen, even a previously innocuous one such the common cold could and probably would, kill you.

He knew that the body of EVERY vaccinated person would be an easy target for any virus, infection or illness, and that it was only a matter of time before the body’s natural defenses, unable to kill off an attack from a pathogen because it had entered into its own cells via the mRNA, would in confusion and desperation, attack and kill itself. This is what is known as a Cytokine storm. The body’s defenses attack and kill the organs of its own body. When this happens, septic shock and death usually swiftly follow.

All of this nicely fulfills Bill Gates wet dream of mass population reduction! Hurray! Well done Bill. You deserve a pat on the back. The years and years of painstaking, dedicated, relentless dumbing-down of the population so that they would unquestioningly accept your lethal “vaccinations” will have paid off – not to mention the enormous pay-off you will receive in the increase to your own wealth from your 20 to 1 return on your investments in vaccine companies.

Yes, by the end of the year 2021, or early in 2022, you may well see these, or similar headlines, as hundreds of millions of people die.

If you were vaccinated in 2021, it might be already too late. I’m afraid that the changes made to your DNA were permanent, irreversible, and soon you might have no functioning immune system to protect you. By taking the experimental gene therapy injections, which you believed were vaccines, you have might have signed your own death sentence. I hope not, but It may be just a matter of time.

So sorry, but we did try to warn you.