Did you know that  the list of possible adverse reaction to the “vaccine” from Pfizer, from their own test data supplied to the FDA is paralysis, stroke and DEATH?

However, the fake “vaccine” is not the only way to cause severe adverse reactions.

Someone who is stabbed with a knife, may have an adverse reaction, but might recover in a few weeks. The same goes for a gunshot wound.

Stepping it up a level, someone who is shot might suffer a much more severe adverse reaction, and die. The same applies to being stabbed with a knife. Just as someone might have a fatal adverse reaction to being “vaccinated”. Is there any difference between the three?

We must remember that vaccines don’t kill any more than guns or knives do.  All are harmless inert objects until they are put in the hands of someone who uses them.

If you shoot somebody and kill them, it is not the manufacturer who is guilty, just because he made the gun or the ammunition.

If you stab someone with a knife, it is not the manufacturer who is guilty because he made the knife.

The person who pulls the trigger, stabs with the knife, or jabs with the needle is the guilty party and MUST be held accountable, personally!

In the previous examples, shooting or stabbing someone is a crime, and the person who does it goes to jail. But injuring or killing someone with an experimental so called “vaccine” is OK it seems. The nurse or doctor in question is not implicated at all. 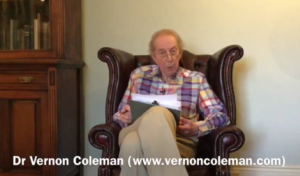 Let’s be clear. Everyone giving the experimental COVID injection WITHOUT explaining that it is a medical experiment; without explaining all of the possible adverse side effects (including DEATH); and without obtaining written consent from the experiment participant IS GUILTY OF A WAR CRIME, as Dr Vernon Coleman explains.

If someone dies after receiving the COVID experimental injection, it is the nurse who inserted the needle into the arm, who is responsible. It is her actions that have resulted in a death. Following orders or government protocols is not an excuse, any more than it was an excuse for the guards in the Nazi concentration camps who said they were “only following orders”. They were tried at Nuremberg and found guilty of their crimes against humanity. They were hung.

Do you think the CEO of Pfizer will go around vaccinating people himself? No, he relies on the “enforcers”, the “order followers” to do the dirty work for him. It is the enforcers (doctors, nurses etc) who administer the fake “vaccines” who kill people, not the vaccine manufacturers.

If the enforcers stop putting needles into people’s arms, the manufacturers can make the most lethal, poisonous injection imaginable and it is totally harmless if nobody uses it.

The way to end the murder by “vaccine” taking place all around the world right now is to make the enforcers personally responsible for the damage they do. When they put down their syringes and refuse to use them, this is all over.

There have been over 10’000 officially recorded deaths in the USA, UK and Europe from the fake “vaccines” – and they are only the tip of the iceberg. The true figure is probably at least 10 times higher. Imagine if every nurse or doctor who inserted the needle which resulted in a death, knew they would be held personally responsible and would be prosecuted as a criminal, for murder.

That would make them think – it might even make them stop